Venting and draining in Stockholm

Here we take a tour of Stockholm. Let’s look at how Swedish house builders and homeowners cope with the challenges of ventilating and draining properties in a colder climate. How adjustable vents are used to control and reduce the freezing winter air and the problems brought on with heavy snowfall. We have supplied adjustable air bricks to Swedish customers on numerous occasions, hence our visit to stockholm. The most popular vent supplied is the hit and miss single sized 9×3 inch air brick item HM3 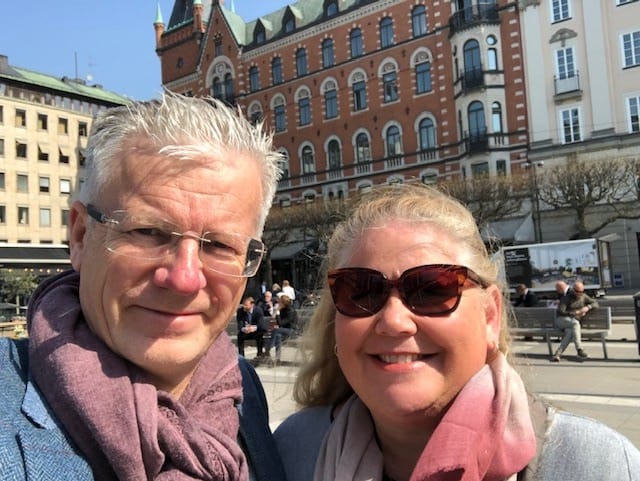 In the UK we are predominantly aware of our prevailing wind from the West (it’s actually WSW). In Stockholm it’s just the same.  UK has a considerable amount of rain so households generally consider keeping the rain out a priority. The precipition is much lower in Stockholm. So here the priority is protection from the cold winter temperatures and winds. There’s also the prospect of snow. 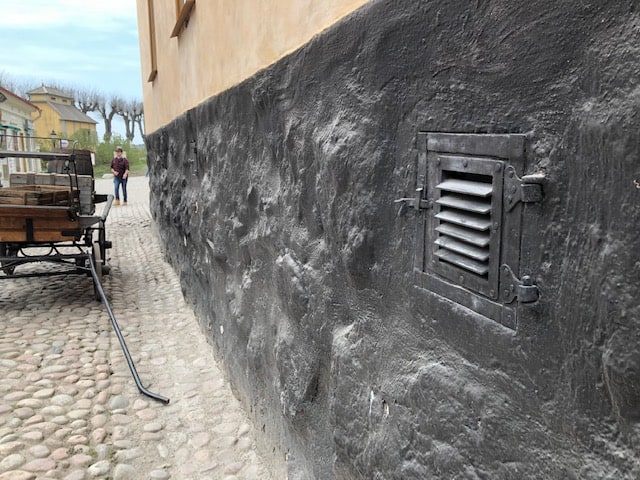 It will come as no surpise that the majority of vents and air bricks in Stockholm are either louvred or hit and miss. It is a feature of these vents that they control the air flow. Especially useful on very cold days. The positioning of air grilles is much higher in a building than in the UK. In London, it’s common place to see air brick vents in the lowest or second lowest course of bricks. These are most likely level with the pavements. In Stockholm, it’s likely these vents would be blocked with snow and ice during winter. This would mean they were incapable of supplying interiors with combustion air for open fires and log burners during the months when they would be needed the most. 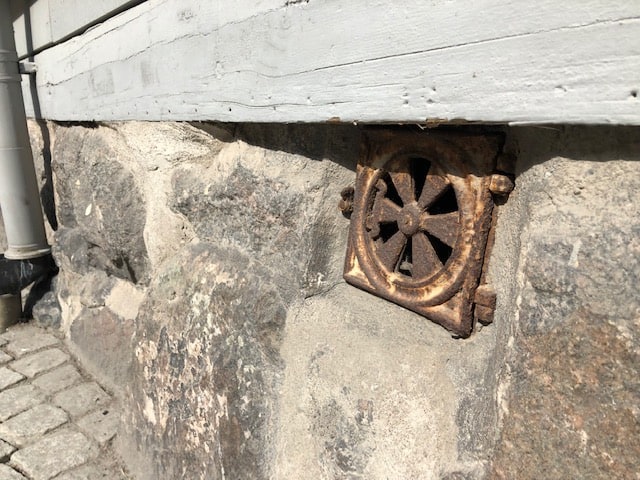 Vents are not being maintained !

It’s absolutely crucial that hit and miss vents are “worked” at least a couple of times a year. In the UK we call them hit and miss vents, in Sweden they are known as vent registers. They are adjustable vents. To keep them well maintained, they need to be moved open to closed a few times and give a light oil, perhaps a spray with WD40. Once checked, wipe off with a rag to take away any excess. If not they soon rust like the example above. If they are going to rust, then rusting in the open position above is preferred.

It’s much more serious if the vent is seized in the closed position. A vent in this position isn’t a vent at all ! On no account should they be painted. They are supposed to open and close and the paint will just jamm up the action and seal it in whatever position it’s in when painted. It will look nice but it won’t be of any use.

It’s not surprising that the winter ice takes it toll on the brickwork so it’s fairly common to see buildings fully rendered. In fact nearly every building here is rendered and quite often brightly painted. 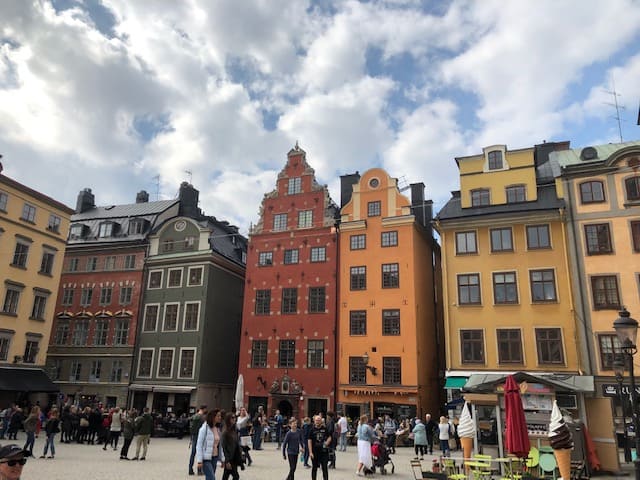 There is one exception and that is Stockholm City Hall which features as one of Stockholms “must see” Landmarks in Time Out.   The sheer quantity of bricks used in the building is breathtaking. We didn’t have the time to explore further but I bet the view at the top of the tower is amazing. If, like us, you love your brickwork then take a look. Don’t look at the wall too closely, there’s a fair bit of lime mortaring and pointing to do. 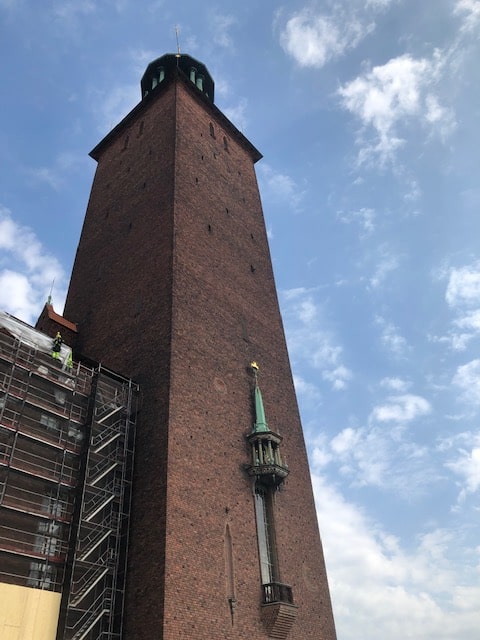 Switching our attention to drainage. We couldn’t help but notice shop owners and householders putting pieces of cable, wire and springs in the rainwater downspouts. These help reduce the possibility of the pipe freezing solid with winter ice and blocking the pipe. It also makes it easier to pull out the ice and loosen it up when the thaw arrives without damaging the pipe.

It is evident that the use of cast iron for air vent registers, air bricks and drains is widespread.  Swedes seldom use it for rainwater downpipes and gutters. Instead the Swedes predominantly opt for the Lindab scheme. A more flexible and lighter tin plated rainwater system. These pipes are relatively unaffected by the expansion and contraction of ice. They also less susceptable to the corrosive nature of salt used at ground level to thaw ice.

Looking up along the guttering we saw occasional examples of thawing cables being used. These are electrically heated wires and tapes used to prevent freezing. We have heard of these being used in USA and Canada but not seen them in Europe until now. 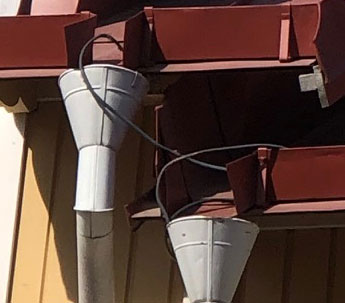 Another feature evident higher up is the use of roof ladders and roof dividers. An ingenious but simple method to prevent or at least reduce the ice and snow “avalanche” that occurs from roofs when the thaw comes. As Stockholm is one of northern Europes sunniest cities, it will come as no surprise that when the roof top thaw occurs  – it can happen rather quickly !

If you do have the chance to visit Stockholm and are interested in the built environment, interiors and architecture then we can highly recommend a visit to Skansen,. This is an open air historic museum and zoo. Here we discovered some fabulous period properties and got the chance to see how the Swedish lived at the turn of the century (1900 not 2000 !). Also on display are techniques for property construction in rural areas. We discovered some early double glazing that actually looks beautiful … 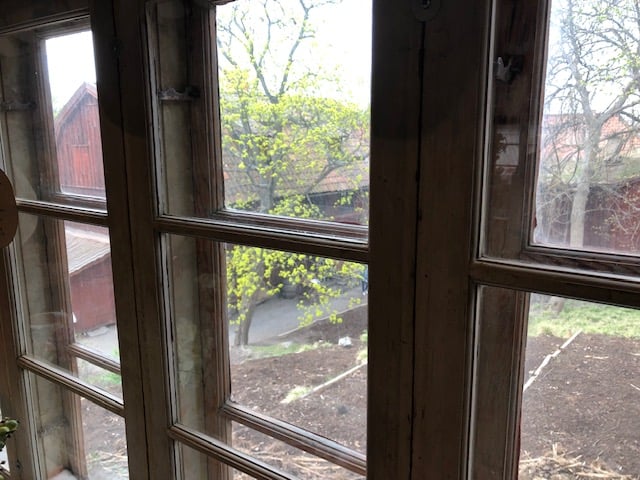 We also discovered a very efficient log burning stove that Swedes have in their homes. It featured a baffle exhaust chimney system. Heat rising from the fire doesn’t just escape out the flue and out the building. The chimney breast wall and the ceiling is also heated by the baffles that restrict the warm air. This ensures that when the weather is really cold, the occupant doesn’t need to go out and get more firewood to maintain the heat.

Utilisng the baffle system has another more envirnonmentally friendly use. It reduces the emmisions to almost zero so preventing pollution and reducing the smog in busy city streets of Stockholm. In rural areas this helps maintain polution free air quality. These fires sometimes had elaborate decorations on them in the form of glazed tiles and had a double door opening on the stove. It’s funny isn’t it, in the UK we think of DEFRA stoves and smokeless log burners as a new invention ? Aparently, in Sweden, it’s been the norm for years and years ! 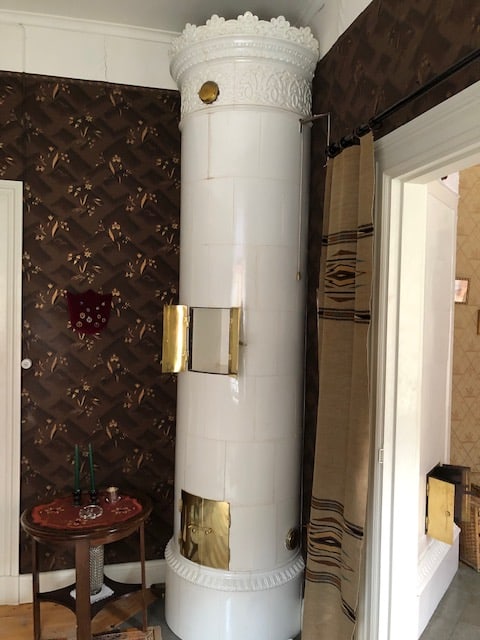 Well that concludes our vent and drainage tour of Stockholm. Of course before we left we just had to go in here… 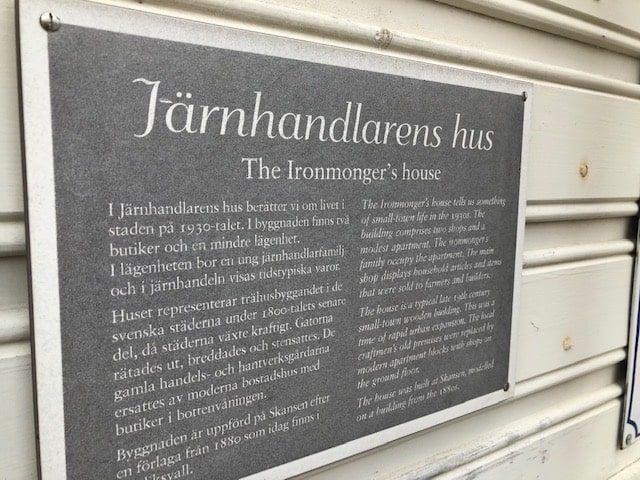 and see how tidy our workshop could be …